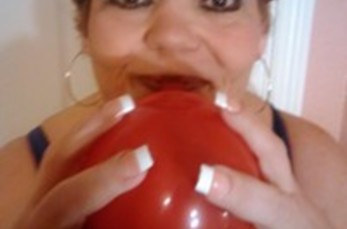 Balloon Fun While I Was In Kissimmee

I was entertaining at my time-share resort in Kissimmee when Eric called me. He had tried to contact me before, but our timing never worked out. However, this time he was able to see me, and I was very excited. I showered and got into my sexy lingerie. He had requested stockings and heels, so I dressed exactly how he wanted, I really wanted to see him. He then asked me if I had balloons and I did not, so he asked me where the closest balloon store was, so I searched up Party City and sent him that address. He let me know he was going to stop there and pick them up. After he got the balloons, he told me he was on his way, when he arrived, he was sexy, and in his hands were a bouquet of shiny colorful BALLOONS!!! I was so happy to see him. I took him into my king size bedroom. We tongue wrestled for a good ten minutes. I'd never really been a fan of balloons, and I was pretty scared of them, but I didn't want him to know that, because in a very big way, this was very exciting to me and I had to get over my fear and fast because I didn't want him to know. I asked him what the balloons were for, but could already guess that he got off to them.

We kissed some more in the bedroom doorway, and as we did, fell back onto the bed. I straddled him and put the uninflated balloon between my lips and blew slightly. The balloon sprang to attention as I did that. I took a big breath, my chest rising beautifully, and blew again. The balloon expanded, filling with my breath, and stopping only to allow me to breathe again before emptying my lungs back into the balloon. It was red, and maybe fourteen inches across by now, and had a huge neck on it.

My last breath I brought the neck to my lips. I would have sworn it would burst, but it didn't and I took it from my lips, letting a gasp of air out before tucking it under my arm and he put an expert knot in the neck. I let it go, and watched it float to the ground, where it bounced briefly before drifting across the floor to nestle beside the other balloons i had already blown up.

The inflation of so many balloons had a very visible effect on me. My nipples stood out like little eraser dots, and my cheeks had turned a rose pink. My breathing was deeper and I was sure I looked so, so painfully horny. We popped some of the balloons we blew up together. It was so fun! I was so turned on playing with this new fetish, that I think Eric could tell how excited I was. I told him, "I blew for you, now you blow for me". I could tell Eric was enjoying himself because Eric Jr. was standing well at attention. I thought his jeans were going to rip from how hard he was. He then put the balloon in his mouth and blew obediently. The balloon stood up and expanded out. He kept blowing until he thought it was about the right size and took it out of his mouth. I told him to "Keep blowing until I tell you to stop." He resumed happily, puffing away. As the neck began to develop, I told him "Keep going, it's got plenty more stretch." He kept blowing, and after a few more puffs, I told him "Whoa! Stop right there, maybe I let you go a little too far."

We continued to blow up balloons of varying shapes and sizes for the next half an hour, until my modestly sized room was swimming with shiny, squeaky and tight balloons. We kissed passionately and Eric began pawing at my nightie. As I sat in the chair, I began to give him a blow job. His penis was so erect, that I felt it throb and pulse as I licked and sucked so lovingly.
As it began to get really intense, I fetched a condom out the drawer and wasted no time in rolling it down over his cock. And as he shoved himself right inside my love canal, I screamed in ecstasy as he entered me and began thrusting rhythmically. I grabbed another balloon and started blowing away, my breaths in sync with his thrusts. He could see where this was headed so he picked up the pace. I smiled at him and resumed my blowing.

The balloon was now dangerously over-inflated and making deep ringing noises with every bounce off my breasts.

The neck had reached my lips; there was nowhere else for the air to go. He thrust in deeper than I thought possible, my pussy muscles spasmed around his cock, and I felt so wet as he moved even faster.

The balloon erupted into a thousand pieces as he let go with a volcanic orgasm. At the same time, I shrieked and bucked up against him.

As we were talking, after our climax, he said that I would now be his balloon girl. I am looking forward to many more fun times with you Eric!

Hugs and Kisses,
Carissa
PS...We should have done something special with the bouquet of balloons, but this was so intense in itself that we forgot.